I can see the finish line... dorminhoco, originally uploaded by @mands.
I've been feeling a bit like this these days. Sort of like a marathon runner that didn't bother to train. Feeling like any solid surface is a good place to lie down and take a nap--Hey! That linoleum looks pretty comfortable. The coolness will feel good...I could just lie down for a second. Maybe close my eyes just for a minute or two.

I have come to a conclusion. Weddings are exhausting. Exciting, wonderful, challenging...and exhausting. It's like a test. If you and your fiance can live through a year long engagement without maiming each other either physically or psychologically then you are officially qualified to live together for the rest of your lives. M. and I have 16 days to go and it looks like we're going to pass the test...just barely. It's the final sprint and like most races those last few kilometers/hours/days can be the hardest.

We recently discovered the special kind of torture that is a seating arrangement. I'm telling you--trying to seat 130 people in a favourable arrangement in groups of 8 where everyone will like everyone else and have a rip-roaring good time is more challenging than you would think. On the surface of things you think--my family and friends are all amazing, wonderful people and this is going to be super easy. Part A may be true, but part B is an illusion only held by those who have never planned a wedding before. Because half way into your seating plan you realize that due to the 8 person table seating restraint you don't have anywhere left to seat your grandma and she's going to have to be at the table with your old high-school friends because it's the only one left with a space and you realize that perhaps they aren't going to have an awful lot in common unless your grandma has a secret history of participating in drinking games and a particular fondness for the F-word. And suddenly it dawns on you that seating arrangements are actually a Rubik's cube in disguise and that the 8 person table limit creates a slurry of unfortunate guest pairings. And just like a Rubik's cube when you finally think you have it all solved and everything is perfect, you give it a once over and you notice that one, terrible, red cube that is not in the right place and a scream rises to your throat because you realize that you're going to have to change EVERYTHING else in order to get that red cube (aka your weird Uncle Willy) in a place where no one will be offended by his off colour jokes and tendency to play footsies with any girls sitting at the table. M. and I tempered our frustration by drinking double screwdrivers. This seemed to help. It made it funny to think about making up the wackiest table arrangements possible.

But in the end, everything worked out. Rubik's cube solved! I think we should get some sort of certificate for this. Or perhaps it should become a televised sport like Poker and gaming competitions. I think there might be a market for Ultimate Seating Chart Creation. It could be hosted by Jerry Springer or maybe Simon Cowell and will definitely involve throwing chairs.
Posted by Andrea Paterson 8 comments

Every morning I am cruelly mocked. It's been happening for well over a month now. At the inhumane hour of 5:30 am every single morning I am wrenched from sleep and find myself awake and confused. Then I hear it. A very distinct piercing laugh that sounds exactly like the sound Nelson from The Simpsons makes when someone finds themselves in an unfortunate situation. Over and over I hear a very loud and very obnoxious HA ha! I have to put ear plugs in to get back to sleep and I never sleep properly after that with the mocking laughter ringing in my head: HA ha--I woke you up. HA ha--you can't get back to sleep. HA ha--you're going to be tired all day. HA ha--and I'm going to do this to you tomorrow and the next day and the next day until you go completely nuts and have to be sent to an institution and then I'll follow you there and mock you from outside your padded room. HA ha....

I would have done something about this horrific mocking a long time ago but the perpetrator is actually a bird and the logical part of my mind that hasn't been clouded by the incessant HA ha knows that there's not really anything I can do to get a bird outside my window to stop chirping--at least not anything I wouldn't feel guilty about later. And really, it isn't the bird's fault that it sounds like Nelson. M. and I considered building a sling shot and scaring it away by flinging marbles or something at it, but the fact of the matter is that we had no idea what kind of bird it was, what it looked like, or where it was even located. So for weeks I have been woken up every morning to the grating song of the world's most annoying bird.

While I couldn't do anything about the noise I really wanted to know what the bird was. I wanted to put a face to the sound. I wanted to be able to vividly picture the instrument of my torture. But it's hard to look up a bird when all you know about it is that it sounds like Nelson from the Simpsons.

Just Google "Nelson Bird" and see what comes up, M. joked. So I did, just for fun, and (unbelievable as it is) I found THIS on the Urban Dictionary site:


Alternate name for the black-capped chickadee. Named after Nelson Muntz, the bully on the Simpsons with the lackadasical and mocking laugh: "Ha-ha." The black-capped chickadee has two songs, the familiar 'chick-a-dee-dee-dee!' and a song that sounds like Nelson's 'Ha-ha." laugh. Listen here:
http://www.learnbirdsongs.com/birdsong.php?id=12
I was astonished. And was later able to corroborate the evidence that the bird disturbing my sleep was in fact a Black-Capped Chickadee. I was walking outside when I heard the distinct laugh very close by. I scanned the nearby trees and found the source. A bird so small that it seemed impossible that it was producing such a racket. I watched its beak open and close while the HA ha emerged, but still wasn't convinced until it moved to another tree and the sound went with it.
So I know who it is that mocks me each morning. There's still nothing I can do about it but at least now I can direct my annoyance at the correct bird and not direct angst at any innocents. 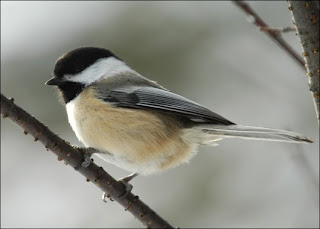 Burnt Out
Andrea. 2010
I had a small bike accident. Anyone who knows me well won't be particularly surprised. Bike accidents and I are very familiar with each other. In fact, I get the sense that bicycles have something against me. I'm not sure what it is. Thankfully this was not a bad accident on the injury scale, but it gets top points on the "that was horribly embarrassing" scale.

It happened like this: I've been itching to cycle to work more but disgusting Vancouver weather has been forcing me to take the bus. Today I was promised a clear, rain-free day by the people over at Environment Canada so I took my chances and cycled in to work. There was a section of my regular route that was blocked off due to a fallen tree being cleaned up by a work crew. A woman in a bright orange jumper was holding up a stop sign. So I did the logical thing and stopped. It was all going well. My bicycle came to a halt, I unclipped my feet from the pedals, and then asked if I would be able to get through using the sidewalk. The woman said that would be fine but that I should use the sidewalk on the other side of the street. Another cyclist had pulled up behind me and I turned my wheel to the left in order to cross the street. It was at this seemingly innocent moment that the accident occurred. As I turned my wheel my bike listed to the side, then the weight of my fairly heavy panniers combined with the weight of the bike took me down. I fell right over into the road! I actually fell pretty hard. I bruised my left hand breaking my fall and scraped up my knee (though bizarrely enough didn't rip my Lululemon pants--apparently they're tougher than my skin). I hadn't even been moving! I was standing up one minute and lying on the road the next with nothing in between that could account for my suddenly prone position. The woman with the stop sign and the other cyclist stared at me. The stop sign woman asked if I was okay. I popped up off the road, brushed myself off, claimed to be fine, and managed to cycle the rest of the way to work without incident if you don't count the nasty stinging sensation in my knee.

And as I was cycling along carefully thinking about the ridiculousness of my fall it occurred to me that the event is a perfect metaphor for my life in this present moment. Things have been extraordinarily crazy in my small world. Between the upcoming wedding that is now under a month away, the death of my grandfather, a few minor health concerns, and a number of other stressful things going on in my personal life I have come up to the edge of my breaking point. The only thing keeping me from crumbling is momentum. I fear that if I stop the weight of it all will be too much and I'll simply fall over like I did today in the middle of 49th avenue. The only comforting thing about it all is that when I found myself on the pavement this morning staring into the concerned faces of two total strangers I did manage to get up and I got to work and got through my day and will presumably  keep on going. Other than finding a thin layer of my knee adhered to the inside of my cycling pants I'm not injured; a bit humiliated, but not truly hurt. And maybe it's a sign that I'm not going to crumble after all. Perhaps the bumps, bruises, and scrapes doled out by life these past months are not quite as life threatening as I've imagined.
Posted by Andrea Paterson 4 comments